What time to watch Game 6 of 2021 NBA Finals series

It’s funny how these things work out sometimes.

Rivals Arizona and Arizona State have the same number of representatives (22 athletes and coachesapiece) going into the Tokyo Olympics, which run from July 23-Aug. 8. So let the medal-count watching begin for an unofficial early jump on the 2021-22 Territorial Cup Series.

There will be eight alums from the two schools representing six countries playing at Kasumigaseki Country Club for golf’s second Olympic appearance since an absence of more than a century (since 1904).

Jon Rahm (Spain) and Paul Casey (Great Britain) are 17 years apart in age and from different eras at ASU but playing well enough to contend.

“They’re both playing at a very high level,” ASU men’s golf coach Matt Thurmond said. “Obviously Jon is in peak form. Either one of them could win and be a medalist at the Olympics. For Jon, so much was made of him being the first Spaniard to win the U.S. Open. There’s such a national element to his career that I think that carries a lot of weight.”

Casey, 43, wanted to play at the 2016 Rio Olympics when some golfers were backing away due to concern about the Zika virus but wasn’t ranked high enough to qualify. Countryman Justin Rose won the gold medal in Rio, but now he is on the outside of qualifying.

“The Olympics are a total no-brainer for me,” Casey told Eurosport. “I worked really hard to make this team.” He last played for Great Britain as an amateur at the 1999 Walker Cup.

“Everyone’s got their reasons, but my reasons for wanting to be a part of this are very strong and very positive and I think it’s had a measurable impact on our sport.

“The guys that did go to Rio, they just harped on about it for years, it’s all Justin Rose talked about, he still talks about it today. He carried that gold medal around in his bag for about two years.”

The four former ASU women’s golfers in Tokyo are two-time Olympians, with Anna Nordqvist finishing highest of the group in Rio at 11th.

“The person that’s playing the best right now is Giulia Molinaro (Italy), who was third at the Women’s PGA,” ASU women’s coach Missy Farr-Kaye said. “She was kind of in jeopardy of almost losing her card and now she’s solidified that for the year. Carlota (Ciganda of Spain) and Anna haven’t had their best year, but they’re still top players in the world.

“They’ve all played well in major championships so this is kind of like another major. I think they’re all real excited. It’s such an honor. It’s something we didn’t grow up thinking would ever happen.”

Teaming up in softball

Softball’s return to the Olympics for the first time since 2008 brings five ASU and Arizona players together to play for Mexico because of family connections to that country. Mexico is making its Olympic softball debut after winning the WBSC Americas qualifying tournament in August 2019.

Pitchers Dallas Escobedo (ASU), Danielle O’Toole (UA) and Taylor McQuillin (UA) are talented and experienced enough to keep Mexico in contention in a six-team field headed by world No. 1 U.S.

“I haven’t heard too much negativity” about Americans playing for Mexico, said Escobedo, ASU’s second-winningest career pitcher. “We’re all fighting for the same thing and we all have Hispanic heritage, whether it’s our parents or grandparents, we have that in our blood. We might get some because it’s going to be worldly broadcasted, but we have so much support from the (Mexican) federation that it’s been amazing.”

ASU has had a track Olympian in every Games since Bill Miller was a men’s javelin silver medalist at Helsinki in 1952.

Van Klinken goes into Tokyo still with the best women’s discus throw in the world this year (70.22 meters/230-4 on May 22) but whether the 21-year-old NCAA champion from Netherlands can approach that under Olympic pressure is an open question.

Benard, of the U.S., and Nettey, who represents Canada, are hoping to improve on their Rio showings, 16th in triple jump and 20th in long jump.

Diogu out, Amukamara in for Nigeria

Ike Diogu, 37, was a surprising cut when the Nigerian men’s basketball team got down to its provisional Olympic roster. The former ASU star played at the London and Rio Games and at the start of July still expected to be a three-time Olympian.

“It’s progressed by leaps and bounds,” Diogu said about Nigeria’s improvement in the sport. “The staff, attention to detail, everything. When I first joined the national team, we had never made it to the Olympics. Being able to qualify in 2012, I saw how far off we were from beating some of those elite teams. Each year we’ve been able to progress and learn. The way we’re tapping into our young pool, the future is really bright for Nigeria.”

As it turned out, Diogu won’t be representing Nigeria in Tokyo, but Promise Amukamara will as the first ASU women’s basketball player to play in the Olympics.

Amukamara, 28, has played professionally overseas since her ASU career ended in 2015 and like Diogu became a foundational piece in the Nigerian women’s ascension to the Olympic stage.

‘It’s been a journey,” Amukamara said. “I’m so grateful and blessed to be able to play at ASU then carry on with my career and being able to be called up for the Nigerian national team and play for them. Everything that has happened I’m just so in shock. It’s been a dream come true.”

The Nigerian women played the U.S. close, losing 76-71 at an Olympic qualifying tournament in February 2020 but lost 93-62 in an exhibition game Sunday when the Americans were determined to end a rare two-game losing streak. Nigeria and the U.S. open against each other in Tokyo on July 27.

An Olympic medal “would be huge for Nigeria basketball” and raise her standing in competition with older brother Prince Amukamara, a Super Bowl champion. “I can finally brag to Prince, tell him I’m the greatest athlete in the family now.” 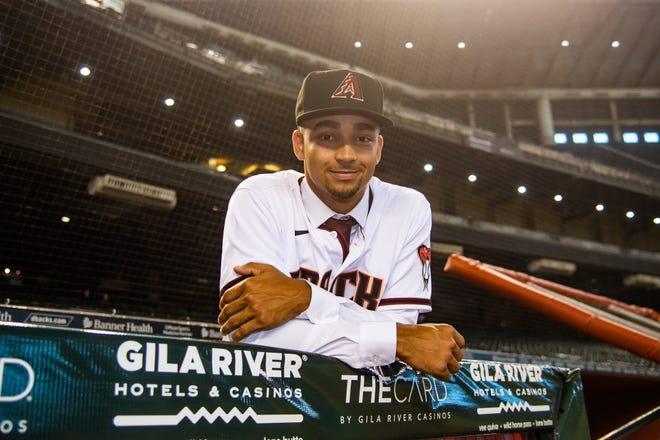 Diamondbacks hope Jordan Lawlar can be the impact player they lack